There are very few women out there who have a holiday celebrating their deeds, but Esther is one of the big ones. You can read the book of Esther in the part of the Jewish scriptures known as the Five Megillot (or Five Scrolls), and you can also find it in the Christian Bible. She isn’t the only hero in this story, but she is one of them. The short version is that a brave queen risks her life to save her people, and these events are celebrated every year on Purim, which begins this evening this year, and happens to fall during Women’s History Month. I’ll give a longer summary below, and you can read the full account here.

I don’t know about you, but I enjoy interacting with the books I read in a tangible way, and Purim is a perfect way to bring Esther’s story to life! In this post, I’ll tell you a little bit about Queen Esther and about how people celebrate Purim. Let me know in the comments below if you celebrate Purim in your household, or what other historical women you commemorate. 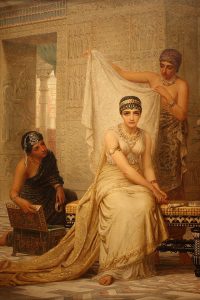 Esther was one of the Jews held captive by the Persian empire in ancient times. She was an orphan raised by her cousin Mordecai, and she was so beautiful that King Ahasuerus (Xerxes I) chose her to be his new queen after his last queen disobeyed him. The king didn’t know her heritage at first and wasn’t thinking about her when the people of his kingdom talked about Jews.

Mordecai learned about a plot to assassinate the king, and he warned Esther, who then warned the king in time to save him. Meanwhile, the king’s grand vizier, Haman, got angry at Mordecai for refusing to bow when he passed by. Haman already hated the Jews, and after this happened, he went to King Ahasuerus and said that the Jews were disobeying the king’s laws and needed to be destroyed. The king agreed, and Haman picked a day.

Before that day could come, Mordecai told Esther to beg the king for mercy for her people. It was against the law for people to go to the king unless he summoned them, though. Anyone else who came to him was executed unless he held out his golden scepter to them. Esther had her people pray for her, and then she went to the king. He held out his scepter to her, and she invited him and Haman to a banquet. Haman was in a good mood, and on the advice of his wife, he erected a tall pole, intending to ask the king if he could impale Mordecai on it. (Some translations will say he wanted to hang Mordecai, though they don’t say he meant to hang him by the neck.)

Before the banquet, the King Ahasuerus remembered that Mordecai saved his life. He had Haman honor Mordecai (when Haman assumed the king was planning to honor him instead), making Haman even angrier and ashamed. He hoped things would go better at the queen’s banquet, but when he arrived, Esther told the king that someone was trying to kill her people. The king was angry and demanded to know who would do such a thing, and Esther said that Haman was that man. The king had Haman impaled on the pole he’d set up for Mordecai.

He couldn’t undo his own rule about the attack on the Jews, which he’d given Haman the authority to make, but he made a new edict that would let the Jews protect themselves. He also gave Haman’s estates to Esther, and when he found out that Mordecai was Esther’s cousin, he made Mordecai a new advisor. Many of the Jews did have to fight their enemies, but many of them were saved.

If you’d like to read the full story, the link that I posted above will take you to the shorter version of the book, which is found in the Jewish and Protestant scriptures. There’s a longer version that you can find in Catholic and Orthodox Bibles. 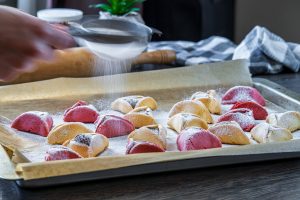 The date of Purim changes from year to year, since it’s not based on the Gregorian calendar. It falls on the 14th day of the Hebrew month of Adar, and it’s a fun, lively festival.

Here are some of the many ways that people celebrate:

You can do many of these on your own, or you can look around to see what’s happening in your community (this year or in future years). One that you can definitely do on your own is try Hamantaschen. You can buy them in many stores, or you can follow this easy recipe to make your own.