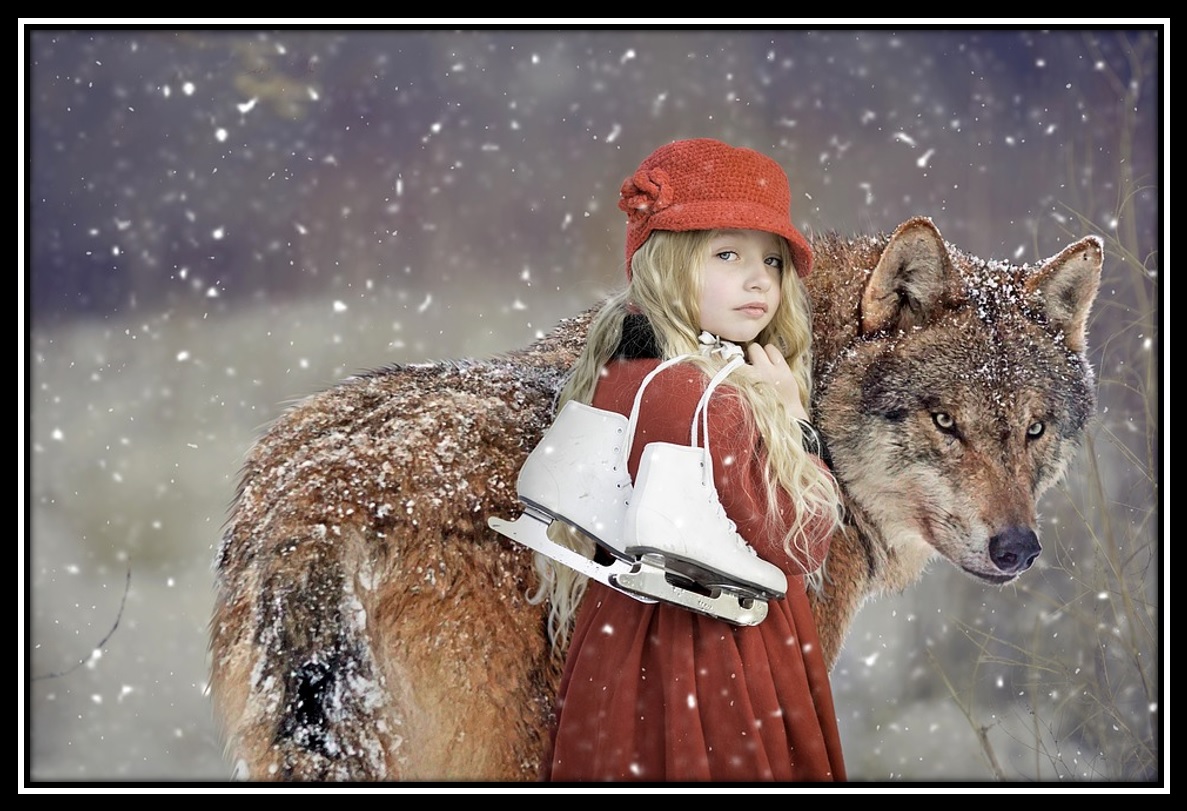 Since last October, I wrote an article on the history of vampires in literature, this year, I’m tackling the werewolves.

Not only is October the season for monsters, but this week is Wolf Awareness Week. Always third week of October (this year from October 17 – 23), it’s a good time to curl up with a book on wolves or werewolves!

You might see the werewolf as merely a horror monster or as a symbol of the evil inside mankind, or you might have another interpretation entirely. People have looked at werewolves in a lot of different ways over the years, their views changing with the times. This article will give you a brief glimpse into peoples’ shifting viewpoints, as seen in literature from ancient times to the present day.

The Origins of Werewolves 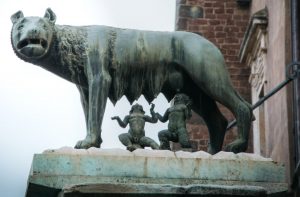 Some people enjoy werewolf stories because they want a good scare, while others truly believe in the existence of people who can change form from man to wolf at will or under certain conditions. Historically, many people who have believed in werewolves have done so because they were caught up in a group fervor, especially in a community looking for a scapegoat, or as an explanation for different physical or psychological conditions.

Many people were also believed to have been raised by wolves, and this idea appears in old legends as well. For instance, the Romans believed that Romulus and Remus, the founders of their city were raised by wolves (as told by Livy in The History of Rome, written between 27 and 9 B.C.).

Communities sometimes accuse individuals with different physical conditions of being werewolves. Here are a few that scholars believe may have contributed to werewolf scares: Congenital porphyria gives people reddish teeth and light sensitivity in addition to psychosis. The hereditary condition of hypertrichosis causes excessive hair growth. Down syndrome can cause a range of physical and mental conditions that often singles people out in society or makes others suspicious of them. Diseases like rabies may have also helped shape werewolf legends, since they’re transmitted through dog bites.

Some forms of psychosis have also been known to give people these delusions or to make people believe that they’re werewolves, such as clinical lycanthropy, a rare psychiatric symptom in which a person believes he is really a werewolf. Since lycanthropy is another word for being a werewolf, it’s important to watch the context of the term to know whether you’re reading about fiction or reality. This has been the case for at least as far back as 1584, when Englishman Reginald Scot writes in The Discoverie of Witchcraft that “Lycanthropia is a disease, and not a transformation.” 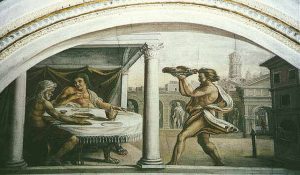 Most early werewolf tales, good or bad, were part of Western culture. In Asia, they more commonly had equivalents like the weretiger or wereleopard.

In Western stories, the transformation is usually seen as a curse. In his Description of Greece (c. 143), the geographer Pausanias wrote about Damarchus of Parrhasia and King Lycaon of Arcadia who each sacrificed a child to Zeus and served the meat as food before Zeus punished them by turning them into wolves. In his Natural History (77, Roman), Pliny the Elder says that once a year, a man is chosen from a Greek clan to become a werewolf and only returns to his human form if he doesn’t eat human flesh for nine years. The medieval Irish kingdom of Ossory has its fair share of werewolf stories. One the Konungs Skuggsjá (c. 1250, Norse) says that a pagan town heckled Saint Patrick when he tried to preach to them, so he asked God to curse them, and God turned them into wolves. Some Medieval romances feature people cursed with lycanthropy through no fault of their own, like Bisclavret by Marie de France (c. 1100, French).

In a few stories, though, people turn into wolves for their own advantage. In Turkic folklore a shaman can transform into a Kurtadam, or Wolf Man. In “The Tale of Igor’s Campaign”, an anonymous poem possibly written in the 1100’s, the historical figure Prince Vseslav of Polotsk is said to prowl as a wolf at night. 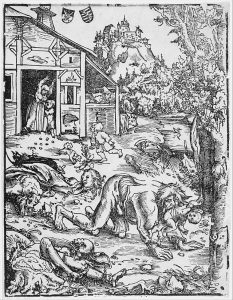 Scandinavian and Germanic cultures often linked wolves to Odin and equivalent deities in their mythologies. Because of this, Christian Europe began to associate wolves with pagans and with the devil during the late Middle Ages. When people started persecuting supposed witches, they also hunted for werewolves. For hundreds of years, they wrote historical accounts of people actually believed to be werewolves. People accused in the werewolf witch trials included German serial killer Peter Stumpp, who was executed in 1589 (see The Damnable Life and Death of Stubbe Peeter by George Boren, 1590, English). Another notable case was the trial of 80-year-old Thiess of Kaltenbrun in 1692. Theiss claimed that he’d previously been a werewolf, but that he and his fellow werewolves used their powers to fight the Devil.

There isn’t a lot of literature on werewolves from this time period outside of these trial accounts. However, some fairy tales and pieces of folklore spring up from this era, using werewolves as villains. One is the Italian “Corvetto” (from Giambattista Basile’s Pentamerone, 1634). Here, a werewolf was one of many creatures working for an ogre that was the enemy of the titular character, a loyal but maligned servant to his king. 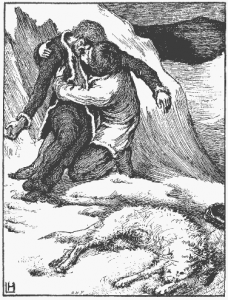 The Middle Ages gave way to the Enlightenment, which went through the late 1600’s and most of the next century. The Enlightenment era had little room for werewolf stories, though, so they were relegated to local legends for a while. They swung back into popularity during the Gothic period and have been gaining steam ever since. Since the Enlightenment praised reason, the Gothic period pushed back with romance and emotion. Stories of the 1800’s became macabre and mysterious, and werewolves fit right into this state of mind.

In the latter half of the century, publishers started producing more journals and magazines that included short fiction, so the short story really took off about then. One such work was “The Man-Wolf” by Leitch Ritchie (1831, Scottish), which was set in the 11th century. The first werewolf short story known to be written by a woman was “A Story of a Weir-Wolf” by Catherine Crowe (1846, English).

Authors were still writing novels, too, like The Legend of Thyl Ulenspiegel and Lamme Goedzak by Charles De Coster (1867, Belgian). In this story, a serial killer covers his tracks by faking werewolf attacks. A more traditional story is Clemence Housman’s The Were-wolf (1896, English), which has a woman turning into a wolf to eat men. 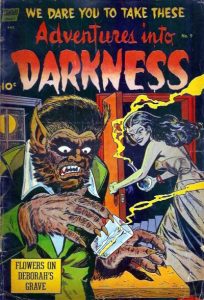 Pulp fiction magazines of the early 1900’s were produced quickly and cheaply and were available to the mass public. They were similar to the short stories of gothic fiction but more sensationalized. Werewolves often featured in these magazines, like the story “Wolfshead” by Robert E. Howard (1926, American), which was first published in the magazine Weird Tales. Even novels of this period, like The Werewolf of Paris by Guy Endore (1933, American) had a similar style. 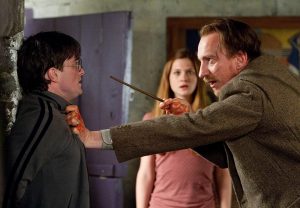 Modern fiction treats monsters and villains more sympathetically, and the werewolf isn’t an exception to this rule. These days, werewolves might be villains, but they’re just as likely (if not more) to be the heroes or love interests.

This is true in popular literature all around the globe. Werewolves are especially popular characters in Japanese manga series such as Crescent Moon by Haruko Iida (1999), Dance in the Vampire Bund by Nozomu Tamaki (2005), and Spice and Wolf by Isuna Hasekura (2006). In both Eastern and Western fiction, werewolves are typically portrayed as poor and working-class, in contrast to rich, upper-class vampires.

Whether hero or villain, werewolves usually experience the pain and guilt of transformation so that the reader can feel bad for them. They’re often shunned by others, too. They might be treated as second-class citizens, like the werewolves in the Harry Potter series by J.K. Rowling (1997, English), or they might be outright hunted, like the hero of Wolf Moon by Charles de Lint (1988, Canadian). 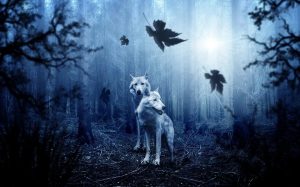 Wolves play an important role in our ecosystem as apex predators, keeping other animal populations under control. However, they used to be overhunted by humans, and grey and red wolves were endangered for many years. The populations are stabilizing now, but we should still pay attention to these animals and watch how they’re faring. This week is a good time to learn about wolves and wolf conservation. If you learn anything interesting, let me know in the comments below!