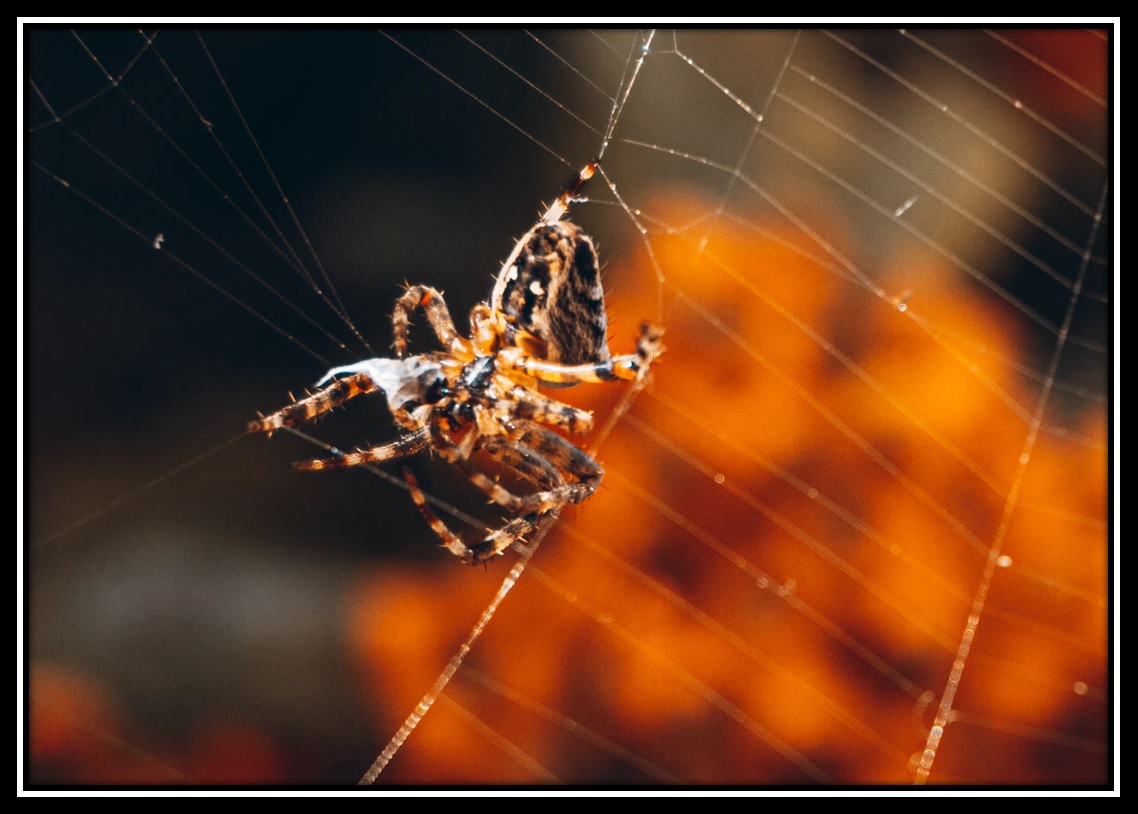 "The Web" by Andrea J. Hargrove

Four fuzzy legs twisted their bundle around and around while the other four held fast to the sticky net of webbing. The boy caught flashes of color as he spun around – bands of orange on the spider’s legs. His own legs, tingling from the spider’s venom though not completely numb, were already squeezed together, and his arms were taut against his body. Each time he turned, another strand of webbing cinched him tighter.

The spider concentrated on the limbs of its prey first, so the boy’s head flopped around unfettered, and he had to squeeze his eyes shut as dizziness overtook him. “Please stop,” the boy whimpered while his mouth was still free. The spider didn’t react. The boy hadn’t expected it would, but he tried again. “We can make a deal.”

Whether the spider understood him or not, it paused briefly and then slackened its pace. The stubby feet pressed into the boy’s shoulders, his back, and his legs with careful deliberation.

Encouraged, the boy forced more words through his tight throat. “I can get you more food.”

It was the only thing he could think of that a spider might want, and it seemed to do the trick. The spider froze and dropped its half-spun bundle so that the boy flopped into the webbing. He landed face-down with his forehead pressed against one strand. Underneath the sticky coating, the strand itself could’ve been wire, the way it dug into him.

Below the web, large, gnarled roots spread out from the ancient trees where the spider roosted, and a coating of autumn leaves marbled the ground between them. The leaves, still brilliant in the dusk, swam in a kaleidoscope of color until the boy could focus his vision.

A small claw set in a hairy mass tapped the boy in the back of his neck, and he gasped in surprise. His chest couldn’t expand the way it usually did, constricted as it was, and the boy panted and coughed and writhed against his bonds. This surge of panic did him no good, and spider feet pushed suggestively against his shoulders.

“I know where a flock of sheep live!” he said, but the spider still flipped him over onto his back, rolling him just a little more.

A row of unblinking eyes stared down at the boy and he shuddered and went limp. He would’ve curled in on himself if he could, but instead he lay there cold and shaking, his gaze fixed on the massive head with that awful set of green eyes that almost seemed to glow in the last rays of evening light. A pair of thick, furry pincers twitched below the eyes, and the boy’s stomach turned.

He made one last, desperate attempt to say something the spider wanted to hear. “I could send other people to the forest.”

Slowly, the spider tipped the boy in the opposite direction, and the thread began to unwind.

Tomorrow starts National Novel Writing Month! NaNoWriMo is a yearly tradition where writers try to write 50,000 words in the span of a month. I’d been planning to spend a lot of the month writing, and I just decided I’ll be doing the challenge for real. I’ll check in later in November to update my progress but mostly to talk about NaNoWriMo itself. To keep with my other goal of doing two blog posts per month, I’ll also put up a poem tomorrow in honor of The Day of the Dead. If you want to do NaNoWriMo as part of the community, you can visit their website to sign up. You don’t even have to do the suggested word count if you don’t want to. You can write more or less as long as you set your own goals. This would be a great time to work on a novel, short story, poem, essay, journal, or other writing project you’ve wanted to do. Let me know in the comments below what your writing goals are!