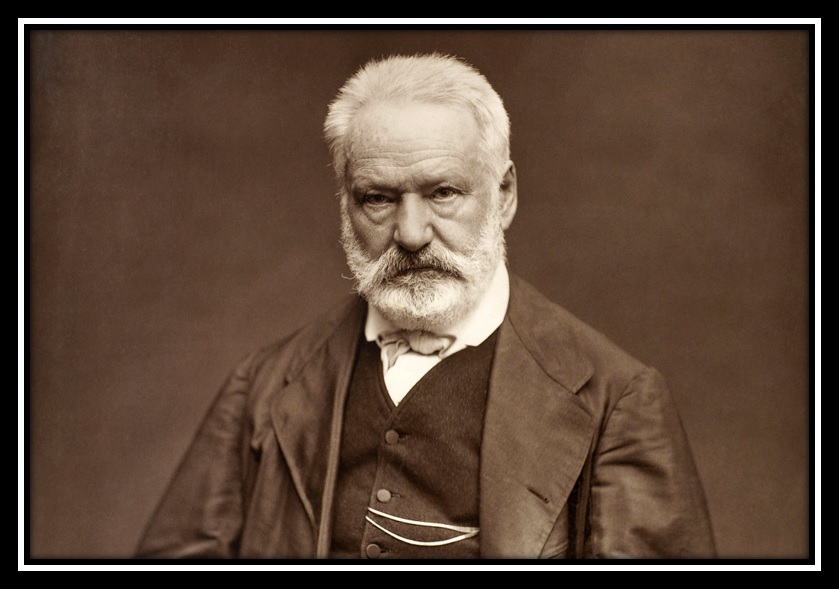 Today is the birthday of French author Victor-Marie Hugo, so it’s a good time to take a look at his legacy, especially how he’s known abroad. Victor Hugo lived from February 26, 1802 – May 22, 1885, and while he was famous in France for several works, including his poetry collections, but outside his home country he’s mostly known for two works. The Hunchback of Notre-Dame (1831) and Les Misérables (1862) (also known as Les Miz) are both embedded in modern pop culture, largely thanks to recent adaptations, and most people could name a few characters and plot points, but it’s worth looking at their author and the ways they’ve changed over time. After all, an adaptation is a cultural snapshot showing us the priorities of the people of the time, and Hugo’s work has turned out to be very adaptable.

It would take a while to go into Victor Hugo’s entire biography, but there are a couple points in his background that are relevant to his perspective on the world when he wrote his novels.

1) War: Victor Hugo’s father was a general in Napoleon’s army. They moved around frequently, and young Victor got a length view of military life, which would turn up frequently in his writing. In fact, nineteen chapters of Les Misérables are devoted to Napoleon’s defeat at the Battle of Waterloo (which took place while Victor was at the impressionable age of thirteen). Victor saw himself as a royalist when he was young, but he gradually took on more republican sympathies as he got older. You can also see these views in Les Miz, since many of his heroes are trying to fight for democracy. This republicanism meant that he had to live in exile briefly after Napoleon III took over the government, but he was eventually able to move back to France.

2) The Catholic Church: Hugo’s views on the church also shifted drastically over time. He was raised as a Catholic and claimed to be one at first. Eventually, he became a non-practicing Catholic, and later still, he started speaking against the Catholic Church. He seemed to take issues with Church leadership especially, which you can see in the evil Frollo, who’s the villain in The Hunchback of Notre Dame. Naturally, the Church frequently banned Hugo’s writings.

The Hunchback of Notre Dame 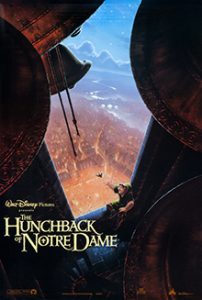 The book that we know as The Hunchback of Notre Dame was originally titled Notre-Dame de Paris. 1482. In fact, the book was focused more on the building of Notre Dame than the fictional hunchback that lived there. This Medieval Catholic cathedral was an incredible architectural feat for the time and even by today’s standards. By the time Victor Hugo was writing, the building had survived vandalism by rioting Huguenots (Protestants) and looting during the French Revolution, but it had long since fallen into disrepair. The officials of Paris were even considering its demolition.

Hugo was fascinated by Notre Dame and wrote his novel largely to draw attention to the building. Historical preservation wasn’t common at that time, but Hugo believed that Notre Dame was an important part of French culture and needed to be saved. The building is, of course, described in great detail in the book. It’s also shown to be the lasting force; it overshadows any of the characters in the end, whether they survive or not. This approach was extremely successful. People were soon talking about the importance of historical architecture in general and Notre Dame in particular. In 1844, King Louis Philippe ordered the restoration of Notre Dame – a project that would be long and expensive but ultimately successful.

Whatever people might have thought of Victor Hugo’s novel or his essays on the subject, historical preservation doesn’t translate well as a theme in other mediums. As soon as the novel started to be adapted for other audiences, the focus shifted away from the building and towards the characters. This was especially true once the cathedral restoration had begun, but even before that, Hugo helped adapt The Hunchback of Notre Dame for an opera that was very different from his original work.

The opera La Esmerelda opened in 1836 and it presented the characters in a different way than the novel had. Esmerelda’s love interests, Phoebus, chooses a different end to his story, for one. Also, the novel had been on the Catholic Church’s list of prohibited works, largely thanks to Frollo. The censors made Hugo change his position in the opera, and many future adaptations had him in various jobs. Many also showed endings that were slightly less bleak than the original.

There have been a lot of movie adaptations of The Hunchback of Notre Dame, but the first one was Lon Chaney’s 1923 silent film. It was pitched as a love story where Phoebus is a good guy, since this seemed most palatable for mass audiences. These changes have stayed pretty much ever since. In fact, the whole movie was remade closely in 1939 (though with sound). The remake especially popularizes the social issues of the book, especially the poor treatment of the Romani people. This emphasis on humanity and discrimination makes sense since it was made at the same time people were gearing up to fight fascism in World War II.

The movie version that most people today know is the 1996 Disney movie, which played with some dark elements. The songs and style were meant to emulate popular Broadway musicals (including Les Miz), since Disney was starting to move some of its animated musicals to Broadway anyway and wanted to prepare ahead. Some of the songs and the plot made the movie more mature than most Disney movies, though Disney couldn’t resist putting in some awkward comic relief and a happy ending. While the book is partly about the darkness and flaws in humanity, the movie turns those themes around to give the story a hopeful perspective and ending. The bad guys are defeated; the good guys survive and live happily; the outcasts are accepted. The message about acceptance is a valuable one (even if delivered in a heavy-handed way), but it has a very surprising delivery if you watch this movie after reading the book. 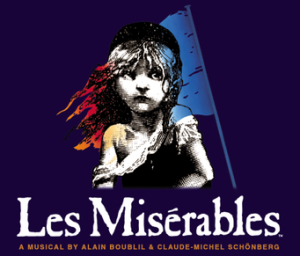 Les Misérables, or Les Miz, literally translates to “the miserable”. It’s about the poor and downtrodden, and a big chunk of it is set during a revolution. Specifically, it was set during the June Rebellion in Paris, which took place in 1832 – a year after Hunchback was published. It was a minor, short-lived rebellion in the middle of a lot of larger ones, and anyone reading this novel at the time would’ve already known that the revolutionary characters were doomed to failure.

Les Miz looked at humanity from a different perspective than Hunchback did. Both works have a lot of major characters die by the end, but in Les Miz, people can affect the world around them. Their lives and choices matter and have wide-reaching ripple effects. This general attitude is consistent throughout many adaptations.

Of course, there are still plenty of changes to be found. The first is that the material needs to be pared down because of time constraints – often sections like the Battle of Waterloo. The only part relevant to the novel is the very end scene, which is the catalyst for a storyline that often gets cut, involving Marius (one of the romantic leads in the novel). His father fights in the battle, nearly dies, and thinks he’s saved by a roguish character that Marius feels indebted to for the whole book. Given Hugo’s history with the Napoleonic Wars, it makes sense that he would feel drawn to this topic and include it in his writing, but for the sake of time, Marius’s father is often removed from the story entirely. (Personally, I’m not upset, because the Waterloo section was the part that was hardest for me to get through in either novel.)

If you enjoy this story and want to experience it in other forms, you have a wide variety of adaptations to choose from, including movies, comics, plays, and radio productions. Just like Hunchback, Les Miz started getting adapted during Hugo’s day, and that trend continues into present times. The movies and Andrew Lloyd Webber’s musical are by far the most popular adaptations, so that’s where I’ll focus.

The earliest film was a short film that came out in 1897 – only 35 years after the novel was first published! This shows how the book had already captured people’s attention and become very widespread.

There have been plenty of movies since then, with one early French movie being close to seven hours long to try to accommodate as much plot as possible. In general, the French adaptations are longer and try to include more of the book than their foreign counterparts, since the book is so highly regarded as part of their culture. Foreign movies generally take more liberties. Now that the idea of a TV series or miniseries is so common, though, many directors take that approach to try to tackle more of the content.

A 1934 French version directed by Raymond Bernard is one of the best-known and most faithful to the book. However, the American version directed by Richard Boleslawski that came out the next year was the source for a lot of changes that would crop up from time to time later on, like Marius leading the rebellion. A lot of scenes and even shots in other films are adapted from this film, too. Both of these films put a lot of emphasis on hunger and poverty, which makes sense given that the Great Depression was happening then. The 1935 film even has the revolution focus on issues like this and say that it’s not about democracy at all. Again, some later films also change the motive for the revolution.

However, there is one main area where early films like this stay relatively faithful to the book and later ones tend to drift away. It involves the story arc of Jean Valjean, one of the main characters in the story. Valjean is an ex-convict who becomes a respectable citizen thanks to a bishop who shows him great kindness after Valjean has wronged him. The events usually stay the same throughout different works, but they take on a different slant. At first, the emphasis is on Valjean’s experience from a religious standpoint: He realizes that he isn’t managing his life the way he’d like, so he gives his life to God instead. Later adaptations are less about his conversion and more about his learning about charity.

Many adaptations play up the revolutionary aspects of the story. While it was only a fraction of the novel, events in Les Miz the musical all come to a head in the revolution. It’s the focus heading into the act break and then for most of the second act, including the grand climax of the action and the final song of the show. Revolutionary imagery is also used in marketing, especially people carrying patriotic flags. (See the above picture.) This musical shows how people can be a catalyst for change.

In the end, both of these works are best known for adaptations which promote social change. Those elements may be present in the books, but they don’t have nearly the same emphasis as they do today. We’ve changed how we see them based on popular adaptation that are often better-known than the works themselves. This might be seen as people disregarding an author’s original intent, but in reality, many works of fiction go through this process. When people adapt fiction, they often look at it through a modern lens and focus on present-day issues. Done right, this can help keep the work fresh and relevant for modern audiences and can help introduce them to classic works of fiction. Right now, social change is the biggest issue being addressed in fiction. Comment below if you have any favorite books or other works on social issues, or what you thought about these two novels.