May the Fourth be with you! Or, in this case, May the Fork be with you! May 4 is Star Wars Day, which is a great day to immerse yourself in the Star Wars universe by watching the movies and shows, reading the books, or getting creative and recreating pieces of the world for yourself. One way to celebrate this or any holiday is to make food for the occasion, and if you go down that road, you have a lot of options to choose from. There are lots of blogs like this one and even a bunch of different cookbooks with Star Wars-themed food. The types of food usually fall into three main categories: word play (like Qui-Gon Jinn-ger Snaps or Greedo’s Burritos), food that looks like things from the universe (like pretzel sticks partly dipped in colorful melts to look like lightsabers), and food that recreates something from the universe itself. The two recipes I have here fall into that last category.

Tatooine is a central part of the Star Wars saga, so I’m focusing in there to bring you two recipes from that world: Dustcrepes and Bantha Steak Soup. Star Wars media has given us a pretty good idea what’s in both of these, so I’ll give you those clues plus my notes about how I adapted them before sharing my original recipes. I’ll also include pictures of the original foods and my recreations next to them.

You can start the day off right with some dustcrepes and nausage, which are described as “a Tatooine favorite” in the Legends book The New Jedi Order: Star by Star. If you want to read the full passage, it’s the start of Chapter 22, but the quick summary is that Luke Sywalker’s wife Mara is trying to make him breakfast during some rare alone-time. It’s a valiant effort for the inexperienced cook, but one that leads with her dustcrepes getting too brown and rubbery and her nausage getting puffed and blackened.

Dustcrepes also appeared in the online game Star Wars Galaxies, which is where the above pictures come from. In the game, it’s described as a light crepe, and to make it, you need wheat, herbivore meat, and an optional light food additive.

It doesn’t specifically mention in the text what Luke drank for breakfast, but the books frequently reference his love of hot chocolate, so that’s a reasonable companion to the meal. 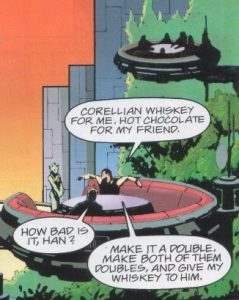 This one is the more straightforward of the two, since it’s safe to assume dustcrepes are basically just crepes. In this case, they’re wheat-based crepes, which we know from the game.

You can fill your dustcepes with some kind of herbivore meat. Since it’s white in the picture, I’m going with chicken. The picture also shows something green in there, and I’m choosing to mix mine with spinach, since that goes well with chicken. Also, the picture shows the filling layered, with a chicken layer on top of the green layer, but I’m mixing them together with a little bit of mayo to add some moisture and help keep it together. As you would assume from a name like “dustcrepes”, they can be a little dry on their own.

Mara serves her dustcrepes with nausage on the side, which is most likely sausage.

After your dustcrepe breakfast, you can have some Bantha Steak Soup for lunch and/or dinner. This one isn’t actually from a book; it’s only in Star Wars Galaxies, so even though this is a literary blog, the soup recipe is here as a bonus. If you played the game, you could earn a bowl of Bantha Steak Soup on Tatooine, and when you examined it, a recipe would appear. That means the challenge here isn’t to start from scratch. Instead, I had to find real-world alternatives to Star Wars ingredients based on what we know of them. 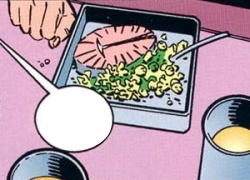 To see just recipes on their own, you can open the pdf here:

Let me know in the comments below if you try making either of these dishes for yourself or anything else in the Star Wars universe.