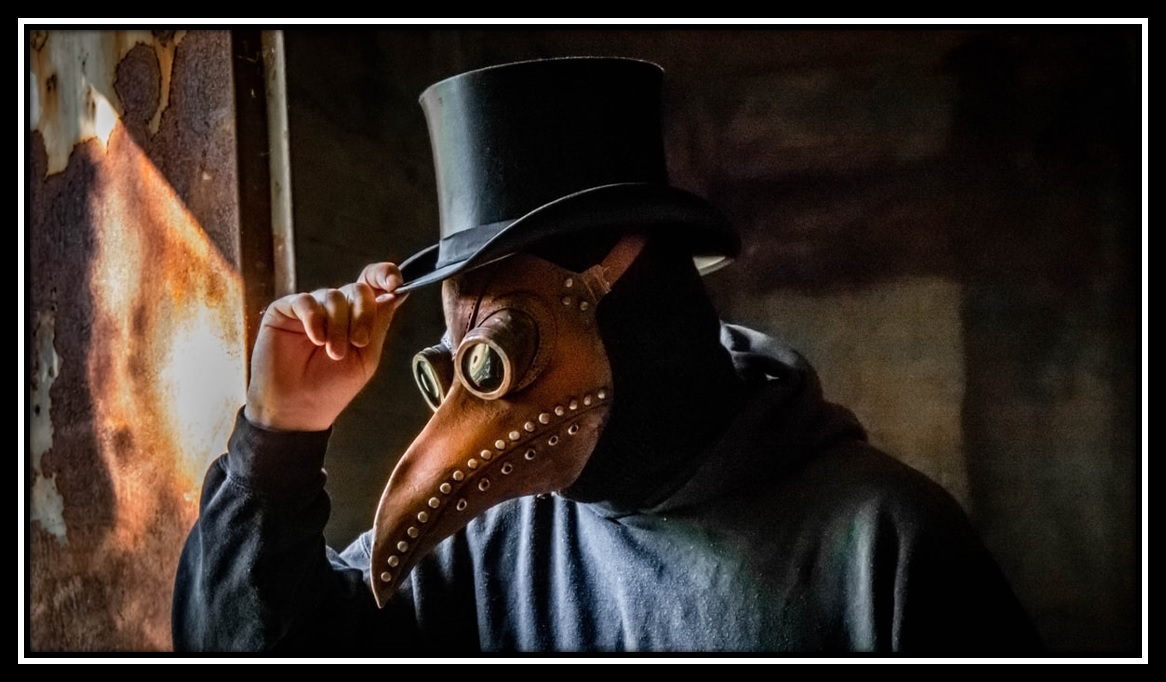 Plagues and other epidemics have spread through populations all over the world throughout history, sometimes becoming dreaded, widespread pandemics. Not surprisingly, these epidemics stuck in people’s minds. One of the best-known accounts of epidemics comes from the book of Exodus. When the Egyptians refused to free their Israelite slaves, God punished them in ten different ways, collectively referred to as the Ten Plagues. (Some involved illness and others involved other kinds of suffering.) There have been other plagues before and after these, too, and we have a lot of works written during or about different epidemics, so if you want to read about this part of our collective past, you have plenty to choose from. 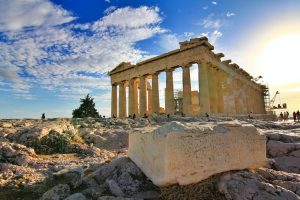 Not surprisingly, a lot of the earliest works about epidemics are nonfiction. One person who wrote about the Plague of Athens was a soldier and historian named Thucydides, who’d contracted and survived the plague himself. He wrote about the plague and war as he discussed human behavior. There’s an account of it in his History of the Peloponnesian War. 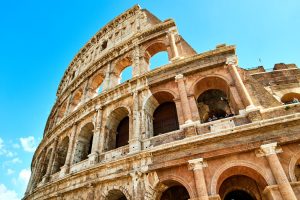 This plague was part of one of history’s deadliest pandemics. Scholars estimating that it killed between 15 and 100 million people over the course of two hundred years. This particular outbreak occurred during the reign of the Roman Emperor Justinian, who refused to show mercy to his people during this time. A Byzantine man named Procopius recorded these events in his work Secret History, talking about how the emperor continued collecting the annual tax, and when people died, he charged their neighbors. (Justinian mainly spent this money on wars abroad and the construction of churches.) Procopius also writes about the spread of the disease itself. He said that there was no room to bury the dead, and people had to resort so stacking bodies, many of whom went without funeral rites. The city even smelled like the dead. 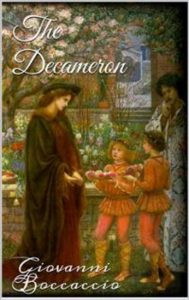 Eyewitness and realistic accounts would continue throughout history and include a number of plagues, but fictional works written during and about pandemics started to take off during the Black Death. One piece features a group of people entertaining themselves in quarantine. The Decameron by Giovanni Boccaccio shows ten young people sheltering in place in a villa outside Florence during the Black Death (the start of the second bubonic plague pandemic). Their setup is a framing device for the stories that they tell each other and is extremely relatable now. Scholars think that Boccaccio wrote the book from about 1348-1353. His father and stepmother both died during this period, too, so some of his time was spent taking over as head of the family. 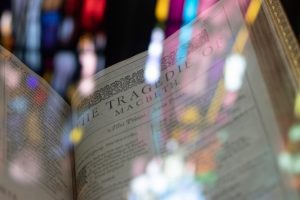 The bubonic plague swept through London many times, but a wave that started in 1603 was notable for its influence on William Shakespeare. Theaters closed in 1606, but Shakespeare was hard at work preparing for the future. He completed three tragedies that year: King Lear, Macbeth, and Antony and Cleopatra, with the last probably written during isolation. This was also the year after the Gunpowder Plot – a failed assassination attempt against King James I – so his works were naturally very somber and contain themes and images of both types of turmoil. The political unrest is a little more obvious in all three works, but you can still see the influence of illness in many places. For instance, King Lear says that his daughter Goneril is “a boil, A plague-sore, an embossed carbuncle, In my corrupted blood.” Plague sores, or buboes, were swollen lymph glands that would get hard then rupture painfully, and this insult is one that would’ve resonated with his audience.

Ben Johnson also set The Alchemist around the plague. In this play, a gentleman flees London during the plague, and in his absence, his butler and others use his abandoned house as a base to con people from. 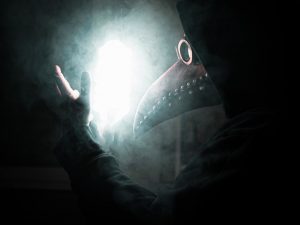 If you want a clear picture of what London was like during the bubonic plague, then a good book to pick up is Daniel Defoe’s novel, A Journal of the Plague Year. It’s written as though it were an eyewitness account, though Defoe was only five years old during 1665, when the book was set, so it’s not likely he remembered all of the details on his own. However, it’s very well-researched and detailed in its setting and descriptions and account of the sweeping reach of the disease.

That book wasn’t published until 1722, but other books did come out during the plague dealing with the subject. For instance, the King had the Royal College of Physicians issue a book on diagnosing plague victims called Directions for Care of the Plague. Unfortunately, that one isn’t available to read. 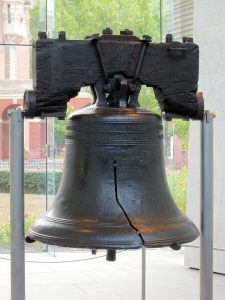 Widespread disease can be found throughout America’s history, too. The yellow fever ravaged Philadelphia and the surrounding area during George Washington’s second term as president, and this event led many Americans to write about it in their own time and in ours. Charles Brockden Brown published Arthur Mervyn in 1799. The titular protagonist, who’s the first known Jewish-American character in fiction, moves from a farm to the city and has to deal with a plague on top of some unscrupulous characters. 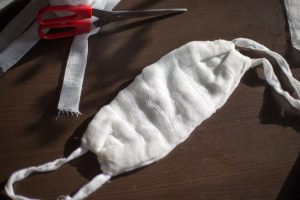 Though the Spanish flu (or influenza) was one of history’s deadliest pandemics, contemporary writers avoided the topic to a surprising degree. Virginia Woolf even lamented this fact in a 1926 essay called “On Being Ill”. A lot of writing at the time was about the First World War, which was also happening at that time. Most of our literature about this flu comes from more recent works, like John O’Hara’s autobiographical short story “The Doctor’s Son.” In it, he describes life during the pandemic in a small Pennsylvania town, as well as his troubles with his overworked doctor father. (See the Modern Fiction section below for more.) 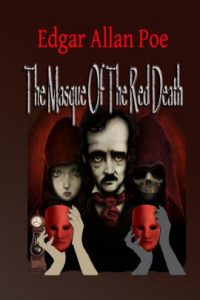 Writers often use fictional plagues in their work to show when things are going wrong in the world, like Sophocles did when he wrote Oedipus Rex. In this play, Oedipus unknowingly kills his father and marries his mother, and the gods punish his people with a plague. This makes him realize something is wrong, and he investigates until he figures out the truth.

In some stories, the plague is a central plot point. For instance, Edgar Allan Poe creates a fictional plague in his short story “The Masque of the Red Death” (published 1842). The Red Death causes “sharp pains, and sudden dizziness, and then profuse bleeding at the pores”, and its victims die within half an hour. In this story, a group of nobles are trying to hide from the Red Death in an abbey, but they’re stalked by a representation of the disease before eventually succumbing to it. 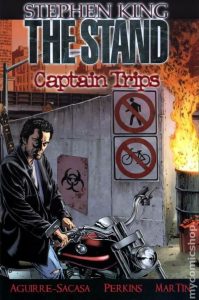 There are also plenty of recent works about plagues real and fictional. Some famous ones include: Pale Horse, Pale Rider by Katherine Anne Porter; The Plague by Albert Camus; The Andromeda Strain by Michael Crichton; The Stand by Stephen King; and Fever 1793 by Laurie Halse Anderson.

As I was reading about the Spanish flu specifically, I found several modern fantasy or supernatural books that use this pandemic as a plot point. For instance, in Twilight by Stephenie Meyer, one of the main characters, Edward Cullen, catches the flu in 1918 along with his family. They die and he becomes a vampire. In Life After Life by Kate Atkinson, the main character experiences a series of lives that take place during the same time period but move in different directions. The flu kills her in some of her lives. One For Sorrow by Mary Downing Hahn is a ghost story about a girl who dies during the flu and comes back to haunt the kids that bullied her. This isn’t a surprising trend, since plagues are inherently tragic, and tragedy is often the backbone of supernatural stories. This particular flu is recent enough that people are vaguely familiar with it and still has some living survivors, but it’s distant enough to be mysterious.

It’ll certainly be interesting to see what literary trends around COVID-19. Some books, fiction and nonfiction, are starting to come out now, but only time will tell where they’ll lead.

Let me know in the comments below if you have any favorite books written during or about plagues, and I’ll see you in February, when I’ll be talking about the Hero’s Journey.