Are you looking for more activities to do virtually with friends? Word games offer a lot of variety, since there are so many words to choose from. (Currently, there are over a million words in the English language alone, with about 170,000 of those in current use.) They’re also usually cheap or free to play. Since this month is National Poetry Month in the United States, I’ll share a couple types of collaborative poetry that you can try. 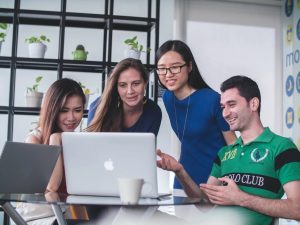 This odd name comes from a line in a poem created in one round of the game, which read “The exquisite corpse will drink the young wine.” In this game, everyone takes turns coming up with words until the poem is done, with everyone agreeing on the line structure ahead of time. The important part is that no one knows what anyone else wrote before him or her. You only compile it all at the end.

You could use the original structure as seen in the earlier line, which is: Adjective, Noun, Verb, Adjective, Noun. After you’ve collected all of your words and created as many lines as you need, you can adjust verb tenses, add articles, and tweak it however you need to so that it makes sense. This game is great for drawing out creative imagery. If you’re bored while you’re alone, you can also make it a one-person activity by using a random word generator. For the purposes of this blog, I just used a generator and the above sentence structure and got, “A sunken roach warns oversized soap.” This is something you can really have fun with!

While the exquisite corpse game is usually meant to be funny, a renga is often a more serious work, though it doesn’t have to be. Renga, a word that means “linked poem”, was originally a genre of Japanese poetry that started in classical times and involves multiple people building a poem by taking turns composing stanzas. When tracing its roots, you can find the idea of the renga as far back as the Kojiki – a collection of Japanese myths, legends, songs, and more that was written around 712 A.D. and is one of Japan’s oldest surviving works of literature. The genre grew in popularity over the years, and the first imperial renga anthology was compiled in 1356. The Japanese had very strict rules for their renga, though those have relaxed in the last few centuries, and if you’re gathering your friends to write a renga together, you can decide on any rules you want.

You and your friends can also make up your own type of poem. The easiest way to write cooperatively is to take turns writing lines or stanzas. When you write, you can pick any type of poem you want, from a sonnet to a limerick to a free verse poem. The choice is all yours. Let me know in the comments below if you’ve ever written with another person in poetry or prose and how the collaboration process turned out!