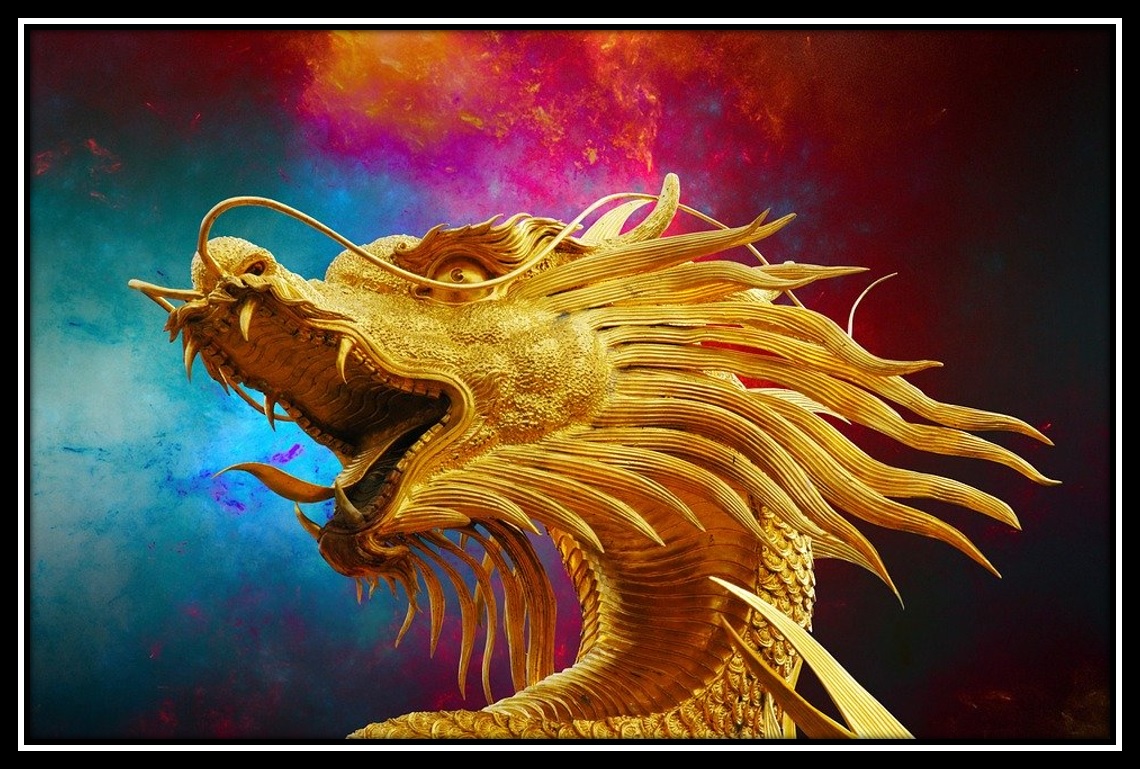 This year, my library, along with a lot of others around the country who use the same company for our Summer Reading Program packages, had “Imagine Your Story” as the theme. That was a mixture of fantasy, fairy tales, and mythology, and it was shaping up to be a really cool theme, though a lot of our programs and events were sadly curtailed due to COVID. However, we did still do a lot of prep work for it, and on top of that, I have a new dragon-themed short story due to be published in November, so I’ve had dragons on the brain for a little while. To me, they’re one of the better creatures to be inundated by, since I’ve always thought they were pretty cool (plus I was born in the Year of the Dragon, so that’s an added bonus).

Others of you out there might have had libraries with the same summer theme, too, but there’s a good chance you’ve run into plenty of dragon stories throughout your life. Dragons have appeared in myths and legends all around the globe since ancient times, and this is a quick overview of the characteristics and history of the dragon in literature and mythology.

Where Dragons Come From 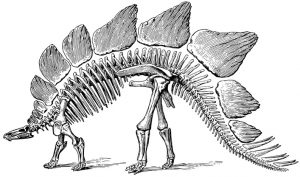 At least some dragon legends seem to have been inspired by the discovery of mysterious bones and fossils. In 300 BC, Chinese historian Chang Qu writes about the discovery of dragon bones, which villagers still grind up for medicine today. Some of these, now on display at the Henan Geology Museum, have been identified as dinosaur fossils. Scientists at the Smithsonian and other institutes believe that when people saw these or living creatures like whales or the goanna (a large, predatory lizard from Australia) or the crocodile, they exaggerated stories to go along with them.

Scientists also believe that part of the dragon mythos comes from psychology. Humans and animals alike often exhibit an instinctive fear of snakes and other predators, and this instinct is reinforced by everything we learn as we grow up. The dragon shows us how a lot of our fears are universal, since the general pattern for the dragon – a fierce, flying, serpent-like creature – is repeated widely. Many dragons are also linked with natural events, like rainfall and draught, which could mean that humans used dragons in an attempt to rationalize real-world events, as argued by authors like Robert Blust in The Origin Of Dragons.

There are plenty of differences between different types of dragons, and different areas of the world diverge in how exactly they think a dragon should look and act. This is partly based on the other animals in the area, and partly based on culture. Some of the broad categories are Eastern and Western dragons, though these stories are not by any means the only ones out there. 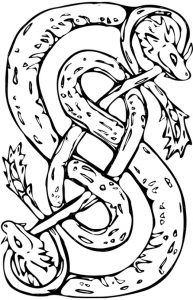 Some of the earliest stories about giant serpents involve Tiamat, the Babylonian goddess of salty seas. Though she wasn’t always depicted as a dragon herself, she supposedly gave birth to the first dragons and filled their bodies with venom instead of blood.

Other ancient myths involve great serpents, such as Egypt’s Apep (who attacks the sun god) and ouroboros (which swallows its own tail), the Feathered Serpent in Mesoamerican religions, Jörmungandr the World Serpent in Norse mythology, the Rainbow Serpent of aboriginal Australia, and Vritra, the personification of drought in Hinduism. 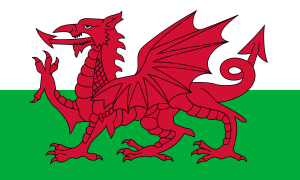 Western dragons are usually large, scaly reptiles, often with horns, and usually with four legs and two wings. They’re traditionally seen as monsters that a hero needs to fight, since they often horde treasure and kidnap damsels, and they can either be cunning creatures or mindless brutes. They’re associated with fire and magic and are usually very old. They might be able to breathe fire, and they might have poisonous blood.

Ancient Greece was a hot spot for stories about giant snakes, like the multi-headed hydra, but the first recorded time the Greeks mention dragons is in the Iliad (probably around the 8th century B.C.). In this story, King Agamemnon has dragons on his sword belt and breast plate. Both snakes and dragons are a recurring theme in Greek mythology and then in Roman mythology, since the Romans absorbed the religions of the civilizations that they conquered, most notably the Greeks. In most of these stories, they show up as some sort of obstacle for the hero to vanquish, often guarding treasure.

I previously mentioned that Norse mythology had a giant serpent, but it also has one of the most famous examples of a classic Western dragon in Fáfnir. Fáfnir is a dwarven prince that appears in the Völsunga Saga (late 13th century). In this story, he kills a sorcerer to steal his gold. This action curses him to become a dragon and guard his treasure until he’s eventually killed by the hero Sigurd.

These are some of the storylines that were most prominent in Western dragon tales – guarding treasure and being slain by a saint or hero as part of a quest. Another common motif is fire-breathing, a trait which goes at least as far back as a dragon in the Old English poem Beowulf (between 700 – 1,000 A.D.).

The United Kingdom has a long history of dragons in its mythology, and the flag above comes from Wales. The red dragon, in particular, is a symbol of Wales thanks to several old legends, including one from the Historia Brittonum (c. 830 A.D.). This book includes a story about a white dragon (symbolizing Saxons) and a red dragon (symbolizing Britons) in an underground struggle. It prophecies that the white dragon would seem like it was winning at first, but eventually the red dragon would beat it. Many people believe that the red dragon was also the symbol of King Arthur. Four-legged dragons and wyverns (two-legged dragons) were and are popular symbols in European heraldry. 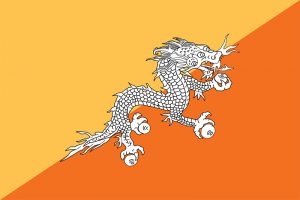 Eastern dragons vary more widely in appearance than Western dragons do, since they often combine the features of various animals, like the antlers of a stag. There are plenty of the reptilian variety, however, and they generally fly, though they rarely have wings. They also have long bodies with a lot of legs. Though some works have dragons breathing fire, they’re more commonly associated with water. Some are massively large, but others are the size of insects.

Unlike the Western dragon, the Eastern dragon was often benign, or even helpful, though capable of great destruction when roused to action. There are some notable exceptions to this, like the Japanese Orochi, which was an eight-headed snake-like monster similar to the Greek hydra. Eastern dragons are generally wise and often make treasure, though it’s difficult to get a dragon to share either wisdom or treasures. Also, in contrast to their poisonous Western counterparts, Eastern dragons sometimes have helpful or life-bringing magic.

Archaeologists have uncovered dragon imagery going back thousands of years in pottery, amulets, and other works of art. One legend says that a dragon helped Yu the Great found the first Chinese dynasty, the Xia dynasty (c. 2070 B.C.). Because of this story, the Xia dynasty adopted a five-toed dragon as an Imperial symbol (with other Chinese dragons traditionally having four toes per foot).

Chinese dragons come in many forms and can look like many animals, but the most common image is a long, wingless dragon, which you can find in the country’s iconography and customs. For instance, many communities carry long paper or cloth dragons on wooden frames as part of a dragon dance that is meant to bring rain. I got to see a variation on this once on Chinese New Year, when I was in New York City’s Chinatown. At that time, several groups of people with paper dragons were going around to visit the shops to bring them and the owners luck, which was a fun and colorful thing to see.

The Chinese dragon spread to many surrounding countries, as well. For instance, the flag above is from Bhutan, and in the center, it features the Druk, or Thunder Dragon, which is the country’s national symbol. In fact, in their native language of Dzongkha, the country is called “Druk Yul”, or “Land of the Druk”. Stories about the Druk came to Bhutan from Tibet when a Buddhist sect began building a monastery (1180 A.D.) and heard a loud storm, like the roar of a dragon, which they saw as an omen.

The Korean dragon is similar to the Chinese dragon, except that it has a longer beard. Korean myths have both “lesser dragons” and “true dragons”, and some of their stories say that some of their kings were descended from dragons.

Japan is also known for its dragon myths, and some of the oldest come from the Kojiki (c. 690 A.D.) and the Nihongi (c. 720 A.D.). These two mytho-histories have some serpent-like water gods that set the tone for later legends that sprang up in other works. 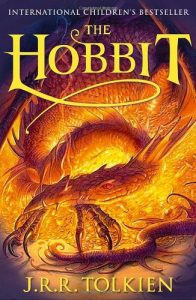 These are only a few of the many, many dragons that populate our ancient tales and legends, which have all laid the groundwork for a lot of modern stories about dragons. Modern dragon fiction usually takes place in fantasy works with other magic or creatures of some kind. Some of my favorite stories about dragons and dragon-like creatures are Lewis Carroll’s “Jabberwocky”, J.R.R. Tolkien’s The Hobbit (1937), Anne McCaffrey’s Harper Hall trilogy (from 1976), Stephen King’s Eyes of the Dragon (1984), Frank Peretti’s The Oath (1995), and J.K. Rowling’s Harry Potter series (from 1997). There are plenty out there, though, and you don’t have to look far to find them.

Dragons are especially big in manga (Japanese graphic novels) and in anime (the animated television counterpart). This extends to Eastern-inspired animation like Avatar: The Last Airbender, which had some impressive and mysterious dragons that very much fall in line with the traditional Eastern format: the heroes go to the dragons for wisdom that is granted to very few people, though they’re in constant fear of being destroyed at the same time. This is just one example of how ancient legends have influenced today’s television, but you can find plenty more dragons in TV and movies, too.

First of all, let me know in the comments below if you have any favorite dragon tales, and also if you want me to do more posts on different mythological creatures. Second, I’m getting on the back-to-school wagon with my next post, so get ready for some learning!